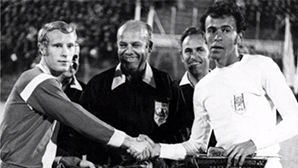 Diplomats on the field

2020 will be the 20th anniversary of the famous football match, that marked a historic turning point in 1970.

Diplomats on the field

2020 will be the 20th anniversary of the famous football match, that marked a historic turning point in 1970.

In 2020, the famous football match, which became a symbol of a historic turning point in 1970, celebrates its 50th birthday.

In February 1970, of all times during a series of anti-Semitic terror, the Bundesliga players from Borussia Mönchengladbach wanted to fly to Tel Aviv for a friendly match with the Israeli national team – on the initiative of coaches Hennes Weisweiler and Eddy Schaffer.

The film recalls the hopeful football game, in which the male friendship of the two coaches enabled a unique act of international understanding. The spectators in Tel Aviv cheered “Vivat Germania!” despite the Israelis’ brilliant defeat: “Long live Germany! – the start of a change of mood at the diplomatic level. Private Super-8 recordings, the only existing video document, show this incredible journey. Interviews with Günter Netzer, Hans-Jochen Vogel and Charlotte Knobloch, bring German history and post-war relations with Israel to life.

February 1970 – a series of anti-semitic terror attacks shocks the world. A Jewish community centre in Munich, a Swiss-Air flight to Tel Aviv, the attempted hijacking of an El-Al airplane, a parcel bomb in an Austrian Airlines plane – the news of horror is spreading.

Now, of all times, Borussia Mönchengladbach’s Bundesliga players are supposed to fly to Tel Aviv for a friendly match with the Israeli national team. For years, the two coaches Hennes Weisweiler and Eddy Schaffer have worked hard for this sporting rapprochement between Germany and Israel.

But due to the acute threat of terrorism, the players refuse to fly to Tel Aviv. A cancellation of the game is imminent. On that very day when Abba Eban come to the Federal Republic of Germany – as the first Israeli Foreign minister to after the Holocaust. A diplomatic faux pas, at a time when the FRG is trying to “normalize” relations with Israel. Chancellor of Germany Willy Brandt and Defence Minister Helmut Schmidt are solving the problem in their very own way!

Mönchengladbach wins 6:0 in Tel Aviv and the “Fohlenelf” (Foal team) shows an exhilarating game. “The greatest game Israel has ever seen,” says the legendary captain of the Israeli national team, Mordechai Spiegler. The surprise: The Israeli fans enthusiastically cheer on the German team.

Even today, historians and politicians agree that this game was the turning point in German-Israeli relations. What politics and diplomacy had failed to achieve, a football match managed in 90 minutes: A come-together of Germany and Israel, of perpetrators and victims after the Shoah.

In a contemporary historical reconstruction, the film shows the ambivalent rapprochement between Germany and Israel after the Second World War. At the same time, it draws a portrait of a football match in which the friendship between a German and an Israeli enables a unique act of international understanding.

Private Super-8-footage of the former Gladbach player Herbert Laumen is the only existing film document of this encounter. The footage not only show the football game, but also the players in private in Israel – great cinema!

Günter Netzer and Mordechai Spiegler, the two captains of that time, tell about the game and the circumstances. Herbert Laumen and Ulrik Le Fevre provide a precise report of the game.

The historians Moshe Zimmermann, Lorenz Peiffer and Wolfgang Kraushaar place these events in a political and historical context.

The President of the Jewish Community of Munich and Upper Bavaria Charlotte Knobloch and the then Mayor of Munich Hans-Jochen Vogel embed the game in this exciting phase of the young Federal Republic.